In these last few days before next weekend's NESCBWI conference, I've been putting the finishing touches on my portfolio book and trying to decide whether I have any dummies in good enough shape to include. I certainly don't want to put sub-par work out just for the heck of it, but I also don't want to miss an opportunity like the conference can provide. Hmmm... probably not enough time left to get everything I hoped to finished. Ho hum.

In other news, I had a booth at Sunday's Craftopia event in Pawtucket. 9 hours of work and I just barely made back the cost of the booth. I gave out a lot of cards, and like every other time it was nice to interact with people directly, but when the highlight of my day was a very old lady randomly telling me about another vendor's painting of a beach that she loved but didn't to buy want because it turned out it wasn't of a Rhode Island beach...well, that's when you know it was a pretty dull day. At least my superstar husband was there to people watch with me.

Actually, the most redeeming part of the day was selling some prints to a mother and her two children. That's always a really nice feeling. Sometimes I should just think of my booth as a tiny travelling museum, free to the public, hoping a handful of people enjoy what they see. 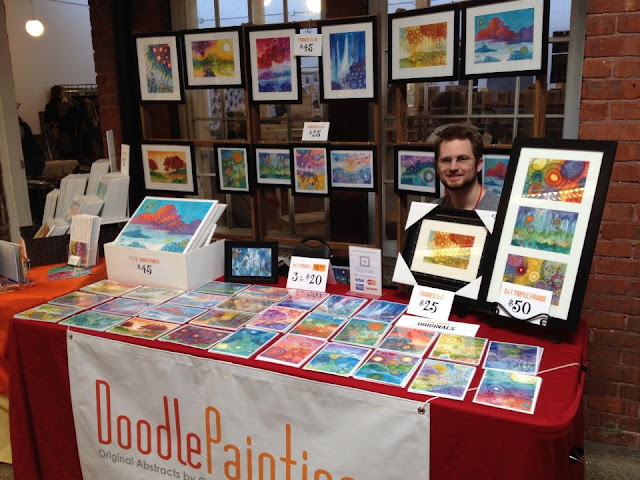 The NESCBWI conference is approaching quickly. My new postcards arrived just this afternoon. (250 is a larger number than I anticipated!) I'm hoping to give some out at the conference and maybe do a small mailing of my own a little later. Overall, very pleased with these cards. I used Modern Postcard and the color accuracy is the best out of any tried thus far. Well worth it, especially for the oversized card --these are 8.5 by 6 inches.

It feels good to have created a piece that I feel plays to my strengths--people, animals, landscapes.

I really want to get more work with older characters. I also want to illustrate stories NOT set in the here and now. Give me fantasy, sci-fi, historical fiction, fables, fairytales, animal stories, etc. I don't think I'm particularly suited to the sort of picture books that are trending right now. (You know- super fun, colorful, strong shapes, scribbly line, looks-like-a-child-could-draw-it kind of picture books.)

And I don't mean that to sound snarky. I am so glad there are illustrators out there for those types of very young picture books. I think simplicity is genius. Gestural, expressive imagery is integral to children's visual literacy. I think it's important that there be artwork that directly relates to children and visually parallels their child-like essence. But I've never been that kind of artist. And although I find it amazingly fun to look at, those kinds of images are not fun for me to create. So I'm just trying to get better at doing what I do...and being who I am...whoever that may be. And for what it's worth, I think there will always be some kids out there who prefer illustrations that don't look like something they could draw themselves. Because I was that kind of kid. So I guess in more ways than one, I'm drawing for myself... 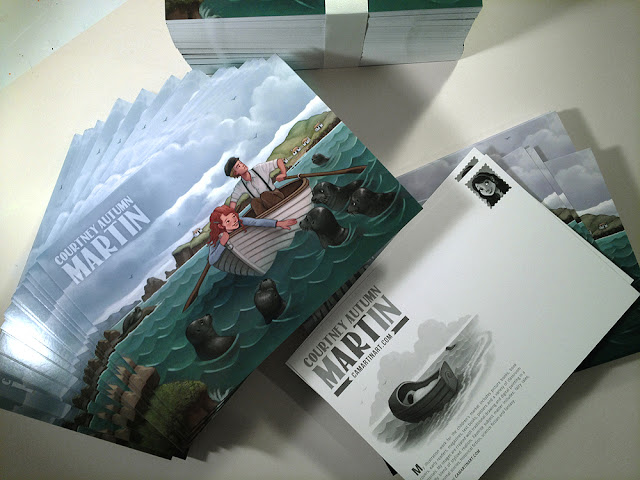 My husband, Adam, decided that he's going to add ebook cover design to his growing list of art/business/design ventures in the making. After throwing some ideas around, I started to take him seriously and began to see how realistically viable this would be for us both to take on as a team. We both work jobs as web/print designers, and with our combined skills and areas of interest I think we could totally do this thing.

We are currently in the process of pinning down a name for this emerging ebook cover business and have begun to put together some sample cover designs. Thankfully, there's no shortage of public domain stories ripe for the picking. Adam's been pulling references and inspiration and knocking out the first round of designs. I'm then taking his designs/ideas and bringing them to finish. Our goal is to get at least eight covers mocked up and then build a simple SEO website that can start catching client leads. Over just a couple nights we've created six sample eye-catching ebook covers that I think rather successfully scale down so that they can be read easily on websites like Amazon or in the App Store.

I've requested to be the company Art Director and Adam the designer. He's definitely an idea man and I love tweaking and refining other people's hard work. Haha.

The six on the left are the finished versions, those on the right are Adam's first passes.

Posted by Courtney Autumn Martin at 12:38 AM 2 comments

My mind has been preoccupied with the tragic and heinous event that occurred on Monday. I've found it difficult to focus on the work at hand, and although I am getting what I need to done, my thoughts have surely been elsewhere as of late. Checking the news every 20 minutes. Or leaving it on, anxiously awaiting the moment I hear something new. Not because I think I'll ever come to understand why this happened, but because I CAN'T understand why this happened. Sometimes I live contentedly in my peaceful bubble and forget that the world can be a terrible, horrible, no good very bad place.

I lived in Boston for three years and was a spectator at the marathon twice. The Life is good office where I worked is at 863 Boylston, a hop skip and a jump from the second explosion. I walked by the finish line and 755 Boylston every week day for two years. It's impossible and overwhelming to wrap my head around something like this happening in such a familiar place. And after the relief of knowing all my friends and former coworkers were safe, came the continued disbelief that this actually happened. So many lives will never be the same. And it's not fair.

We, the helpless onlookers, join in their pain. Because we have humanity. Because we have imagination enough to fathom even just a tiny bit of that pain and become overwhelmed by the injustice of it all. Empathy is the greatest quality we have to offer the world.

I can't fix the world, but I can feel for it. And find reasons to love it despite it all. I contribute a little of my own color and my own happiness, and try to fight the dark with a glimmer of light.
Posted by Courtney Autumn Martin at 11:12 PM 0 comments

As a child, I was completely captivated by the John Sayles film The Secret of Roan Inish. It was somber, moody, atmospheric, mysterious, moving, charming, and oh-so-very IRISH. It was beautiful in both its mythic fable-like story, as well as its muted, lustrous cinematography. Essentially everything I loved in a story then and even more so now. As an adult I discovered the book upon which it is based, the Scotland-set The Secret of the Ron Mor Skerry. The story concerns a young girl, Fiona McConville, who returns from the city to live with her grandparents on the coast of Scotland. All of her family had been living on the nearby small rocky island of Ron Mor for generations until they all evacuated four years prior. On that day, Fiona's baby brother Jamie was tragically swept out to sea in his little cradle boat, never to be seen again. But Fiona believes her brother may still be on Ron Mor, and begins to suspect he's been protected by the seals that inhabit the island.

Originally published in 1950s, it has been out of print for a long time, apart from the straggling copies of the 1994 movie-tie in book, which is what I have. But this version of the book has always bothered me. It's the exact same text as the original Ron Mor, but just its title on the cover has been changed to Roan Inish. The original book also featured lovely black and white line illustrations by the author herself. For such a magical story, my lackluster printed copy simply won't do.

For several years (ever since I tracked down my own copy of the book via Ebay), I've wanted to revisit the story with my own images. Almost 20 years after seeing the film, I'm finally doing it! I've begun here with the cover and would like to continue on with creating black and white chapter illustrations as well. I plan to play direct homage to Rosalie Fry's original vignettes in addition to adding some of my own imaginings.

But for now, here is the cover in process form.

6. Final version, adjusting placement of elements and position of figures.

Posted by Courtney Autumn Martin at 10:50 AM 7 comments