COME CLOSE, AND I'LL TELL YOU A TINY STORY

Yesterday I spent time building up my boards on Pinterest, including one board called "Say It With Style" which hosts myriad inspirational quotes in lovely typography. I came across a darling little graphic which reads "The universe is made of tiny stories" (by Jo Klima), which just so happens to perfectly align with my own perspective on life.

It inspired me to seek out the source of the sentiment. Turns out it originates from hitRECord.org, the successful collaborative media endeavor by Joseph Gordon Levitt. I then discovered the first two printed volumes from the site's "Tiny Stories" collection. Tiny stories are collaborative pieces in which a person can author a tiny story, create a tiny illustration, or do both. People then "remix" the content submitted, either by pairing a text with a image of their own or writing text for someone else's image. The result is fun and surprising, at times beautifully poetic and insightful, as well as funny and bizarre. These little books arrived today, and I can tell you from experience that they are delightful. 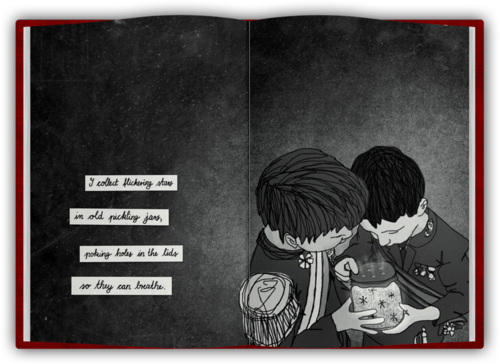 I decided that crafting tiny stories of my own might be a great exercise to get the word juices flowing. So I grabbed a fresh notebook and began writing freely in what felt very similar to stream of consciousness. Here are a few of my favorite tiny stories that emerged:

Sometimes I look up at the stars and wonder, who's looking down at me?

A shiny copper penny rolled under the refrigerator.
"What a waste," it said to itself.

For one brief, shining moment, the cloud saw himself as he truly was.

"But we don't have a map!" she exclaimed.
"Follow your heart," he replied with a wink.
They were never seen again.

The toilet seat never quite warmed to his choice of career.

The potato was very self-conscious about perpetuating stereotypes, so he only watched PBS and The Discovery Channel.

The book waited quietly in the corner of the shelf for the day to come when he was needed again.

She didn't know then that a simple 'hello' was just what he needed to hear.

Evidence of her happy life lay in the geography of her face; rivers, canyons, and tributaries carved deep by constant use.


Feel free to leave your own tiny story in the comments!