Here's hoping that 2017 will be leaps and bounds more productive. 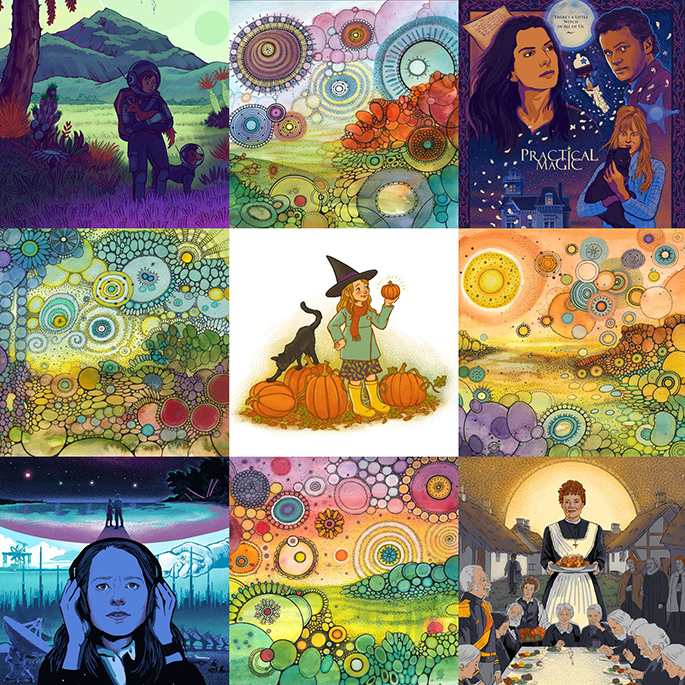 Posted by Courtney Autumn Martin at 9:58 AM 0 comments

I REALLY want to wiggle my way into the private poster commission world---as a poster buyer, I am obsessed. But I dream of being a poster maker, hired to make posters for some of my favorite movies. In an attempt to build a portfolio, I've got a few personal projects I'm working on at the moment. 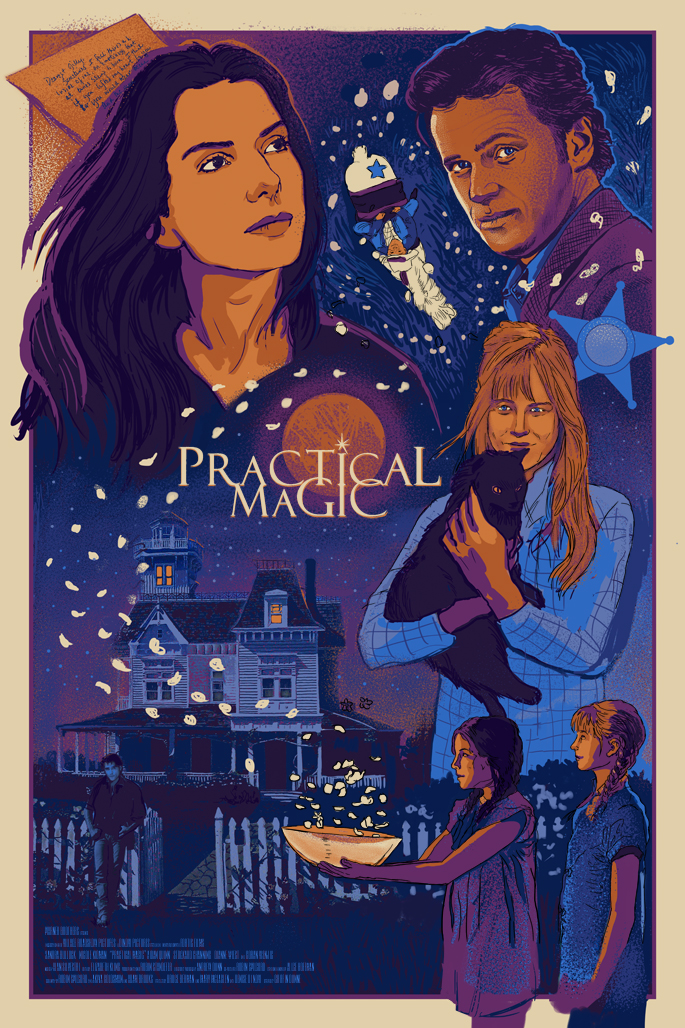 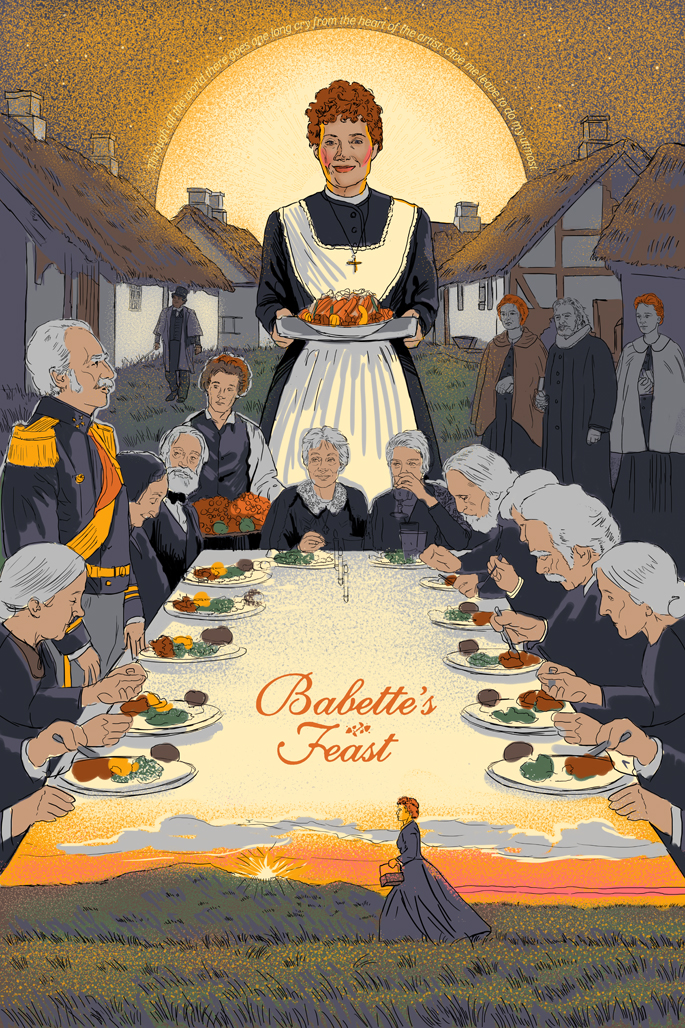 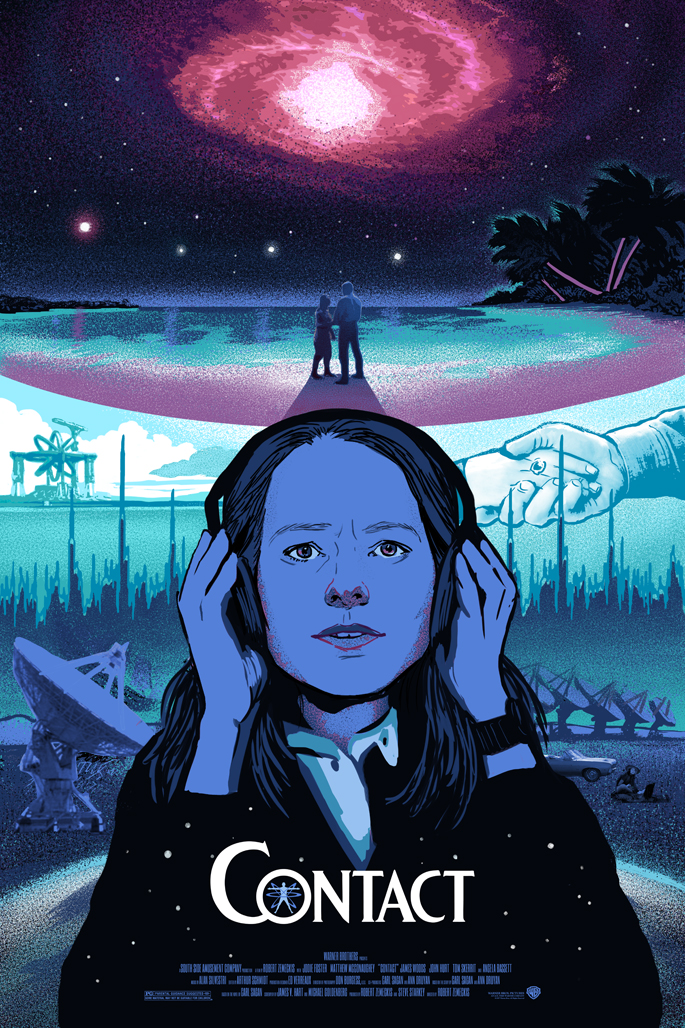 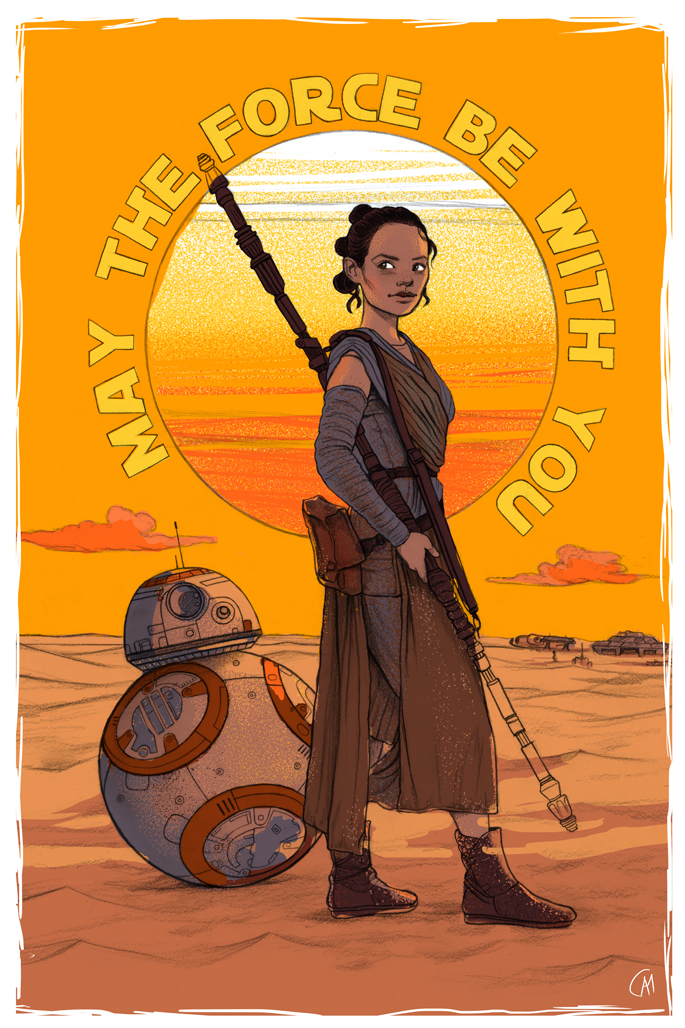 This week I worked on a little illustration sample for inclusion in my agent's Halloween themed promo. Since I will be headed to the UK for 11 days I wanted to get it finished before that.

I began with a colored pencil drawing on bristol. Once scanned, I decided she needed a witch's hat to be more festive. 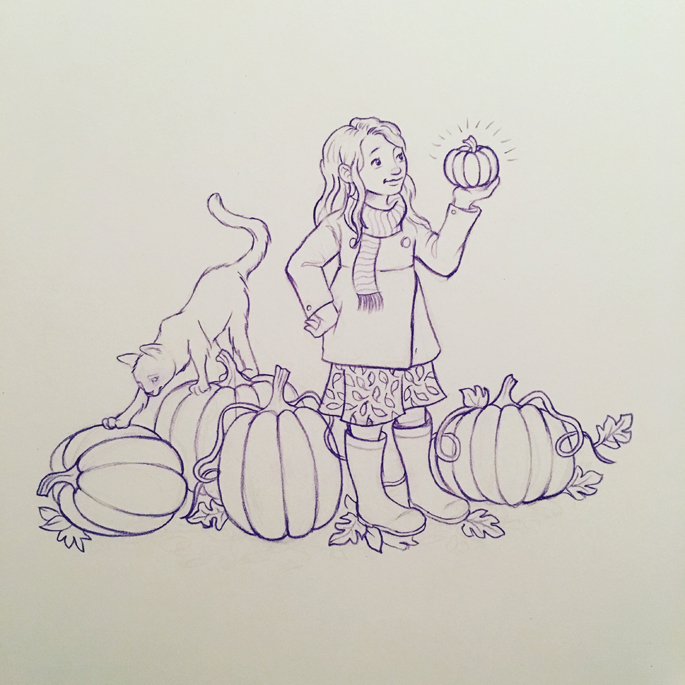 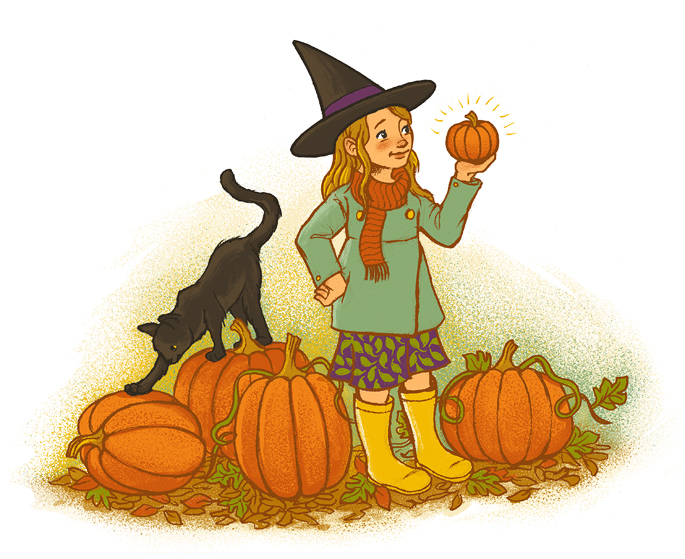 Life in Color: A Coloring Book for Bold, Bright, Messy Works-In-Progress, the teen coloring book to which I contributed 5 original doodle coloring pages has been published by Capstone Publishing! It's a very nice collection of hip images by 12 different artists, and I'm very proud to be part of the collaboration.

Here's the description from Amazon:


Calling all teenagers and teens at heart! Packed with over forty designs, ranging from basic to intricate, these edgy pieces of art are just waiting for you to add your creative flair. A practice space for the budding artist, a gallery of contemporary artwork, and a canvas for your creativity, this book will inspire you to embrace your inner teen.

It's available for purchase on Amazon. Here's a sampling: 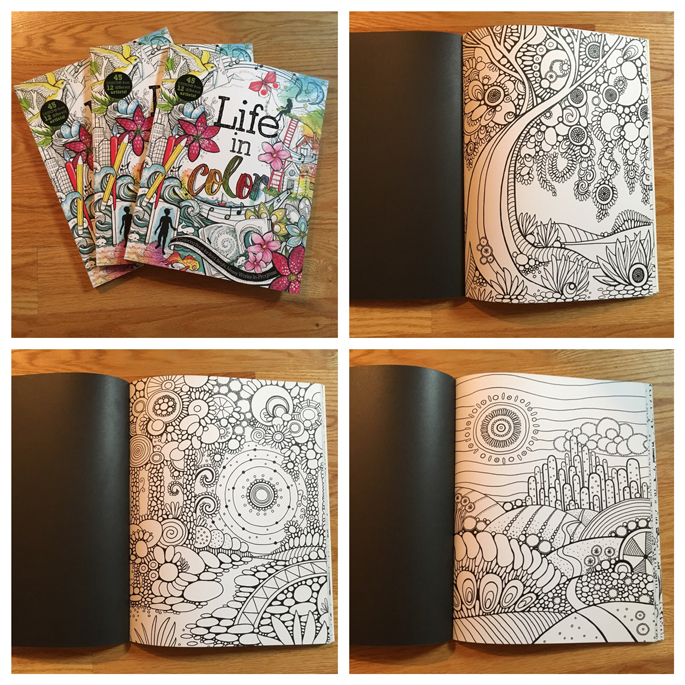 Posted by Courtney Autumn Martin at 9:19 AM 0 comments

I've returned to working on my 24x36 illustrated poster for Practical Magic (my favorite movie ever). Now that I'm settled on the color palette and the overall composition, next I will move on to the actual drawing phase. I'm excited! 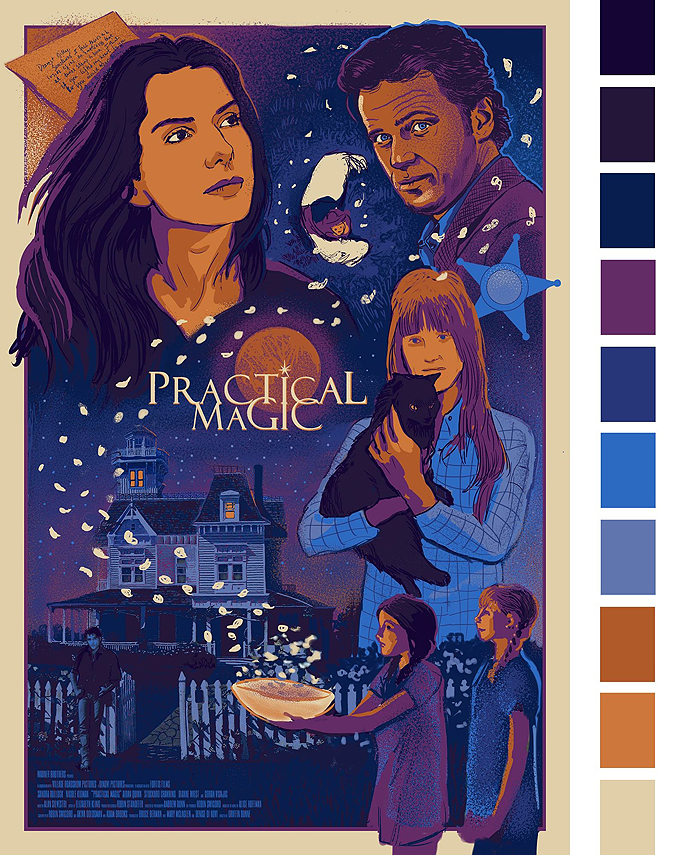 My agent is putting together a promotional mailing with samples from each her artists. We were asked to include a new piece using an original character from a project we are either developing or want to develop. I have been away from illustrating for the past few months but knowing she wanted full participation motivated me enough to sit down and spend some time drawing again.

Prior to beginning the piece, I had no character or story to speak of whatsoever. But I did have the idea that I wanted to create a series of illustrations taking place on different planets, with some kind of explorer in each scene, so I figured I could turn that into fitting the character prompt.

With very little to go on, I began digitally painting an alien landscape. Then I roughed in a figure---who became an astronaut---who became a young girl. Suddenly I was painting her carrying some kind of creature. And there was an astro dog companion by her side.

As I sketched out the composition, a story began to emerge of a girl named Dara, her dog, Fritz, and the orphaned foundling, a creature called a silkan, that she is determined to save. Pretty crazy that the brainstorming I was doing while drawing lead me to an idea for a graphic novel that I'd actually like to pursue. Imagination is a magical thing.

Here is a peek into the basic process. 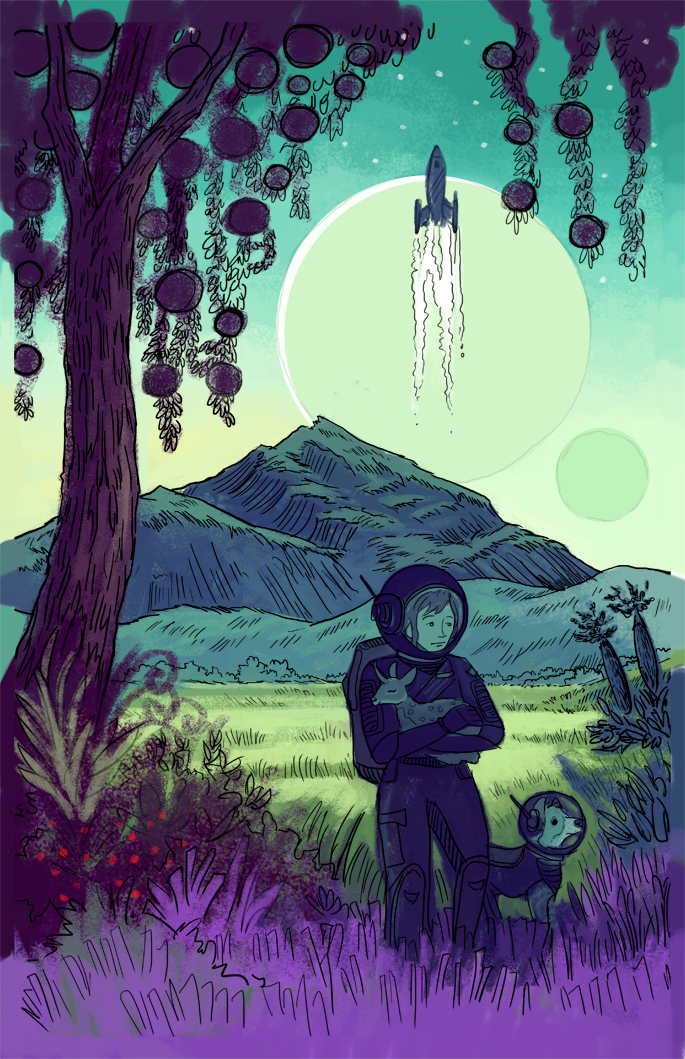 2. Colored pencil drawing on bristol.
I printed the sketch very lightly onto bristol board and drew a clean drawing over it using a dark purple colored pencil. 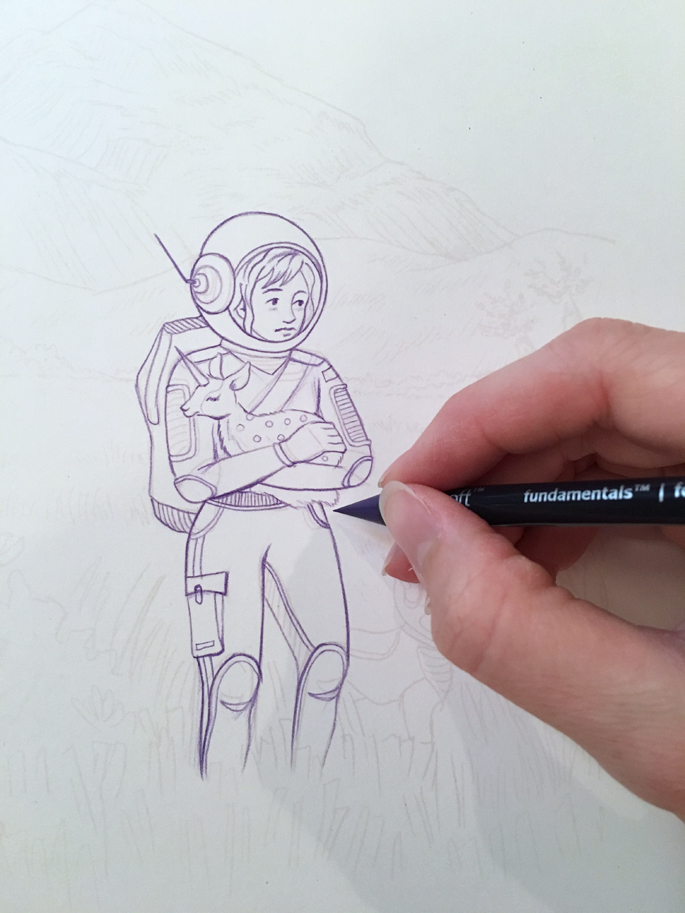 3. Final colored pencil drawing.
I scanned it into photoshop and brought it back into my original colored sketch file. 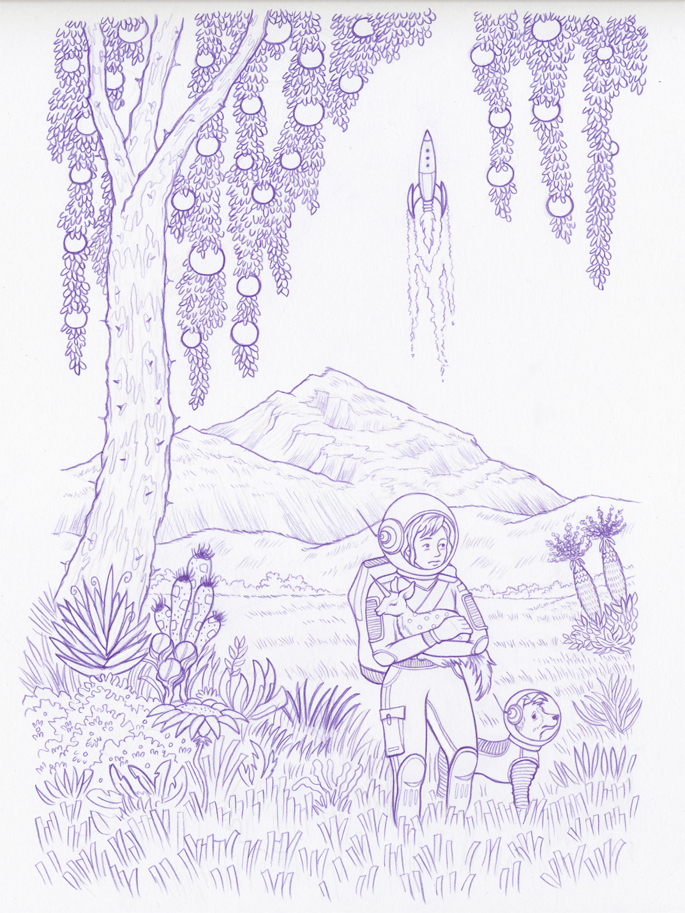 4. Final colored painting.
After a day's work, the final digital painting is complete. I had fun playing around with colors and textures. In fact, it was the most fun I've had illustrating in a long while. The process was enjoyable and proved what I have long suspected: I NEED to draw (in colored pencil) FIRST and color the image digitally. It's the only way I can harness what I am best at, which is line work made of real pencil on paper. 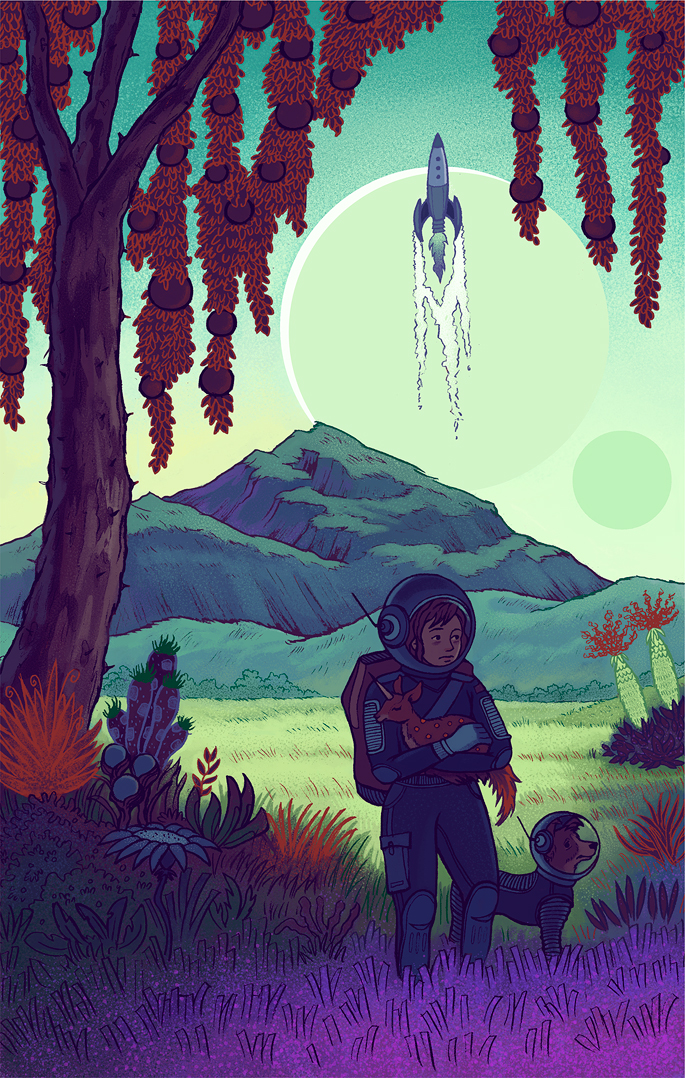 TO MOVE WITH PURPOSE

I've been struggling to manage my health since February. It's been one ailment after another, continuous effects from chronic Lyme disease. It's been nearly 6 years since I first got sick. I am overwhelmed with the unknown of it all.

So I will keep floating and enjoy the clouds as they pass overhead. 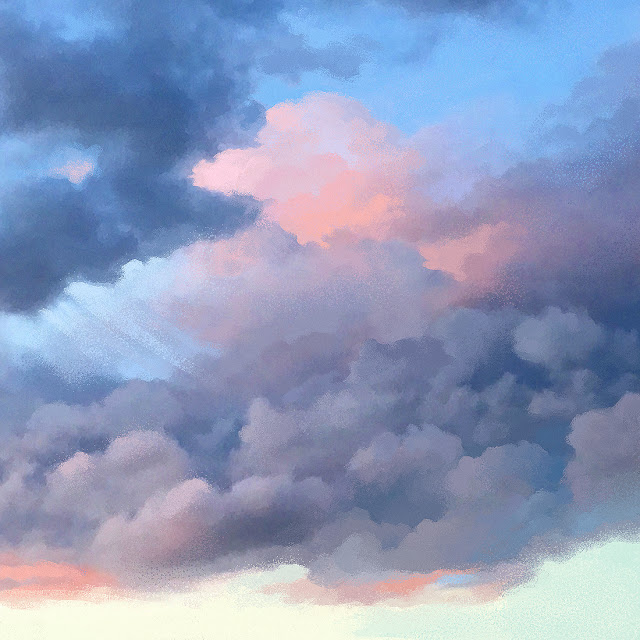 JOIN ME ON PATREON

Do you like the idea of spending $20/month to get an 8x10 print of my latest doodle and access to my latest coloring page? Then consider joining my NEW Doodle of The Month Club via Patreon!

There are other patron levels (from $5 to $50 per month with cool perks plus one $150 slot for a custom doodlepainting) and every bit of support helps make my world a little more colorful and a lot more doodly.

Visit my Patreon Page to see a full list of levels and perks! 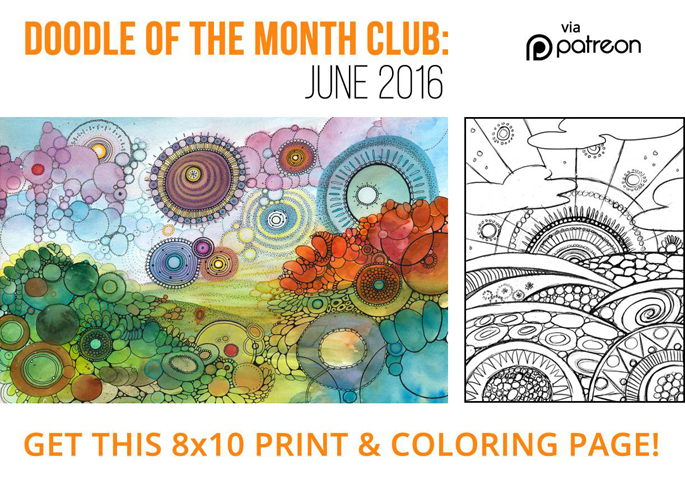 I'm working on another fan art movie poster, this time for Zootopia. My husband and I adore the movie and would love to hang a poster for it on the wall.

At this point this image is just a Photoshopped collage sketch---I haven't drawn the characters myself yet. I start by pulling the individual images I want off the internet, moving the pieces around, scaling, cropping, adding some of my own design elements, selecting a color palette, converting the images to flatter blocks of color within that palette, and quickly painting things in to connect all the pieces. It's a few hours worth of thinking through the design, and it's a very different method than drawing from scratch. Still need to condense the number of colors and simplify the shapes. But I'm happy with this start. More to come! 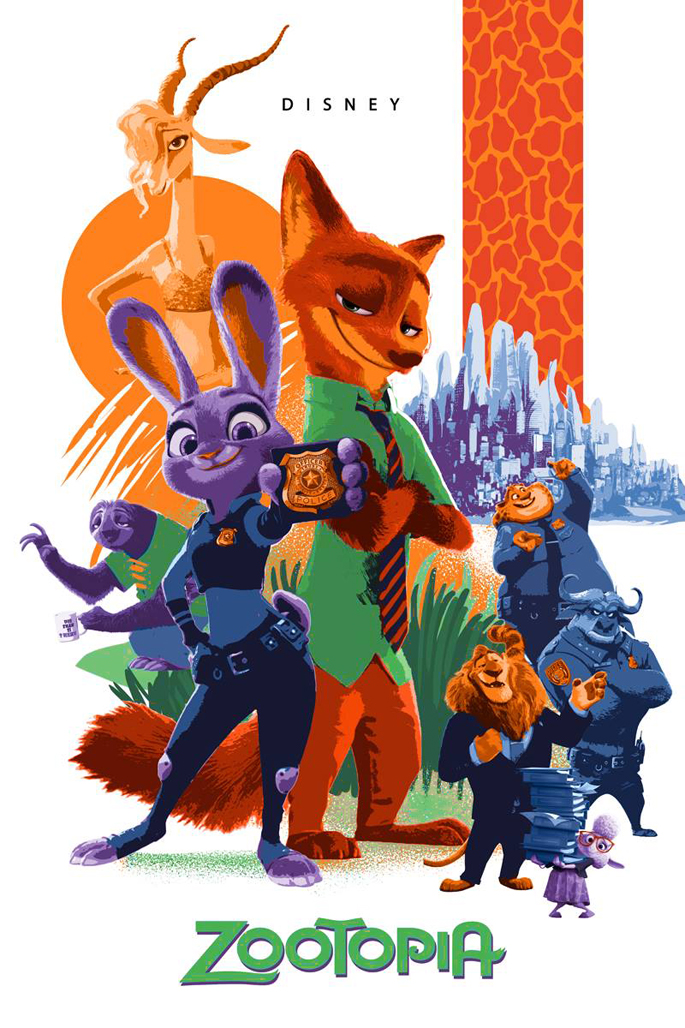 Posted by Courtney Autumn Martin at 11:18 AM 0 comments

For a while now, I've REALLY wanted to dive into making silkscreened alternative movie posters for fun. (I mean someday I would love to run commissions for my own posters but let's not get ahead of myself...)

I had started in on my design for a Practical Magic poster last year and while that is definitely still on the TO-DO LIST, I've bumped Contact up to the top because it's a simpler idea that will let me figure out technique without getting caught up in details.

So here is my crude sketch and quick color study. I narrowed it down to 8 colors, and if I used purple paper I could get it down to 7 printed colors. I was figuring out if I want more or less around Ellie, and threw Palmer in there, but have decided to leave it just Ellie. 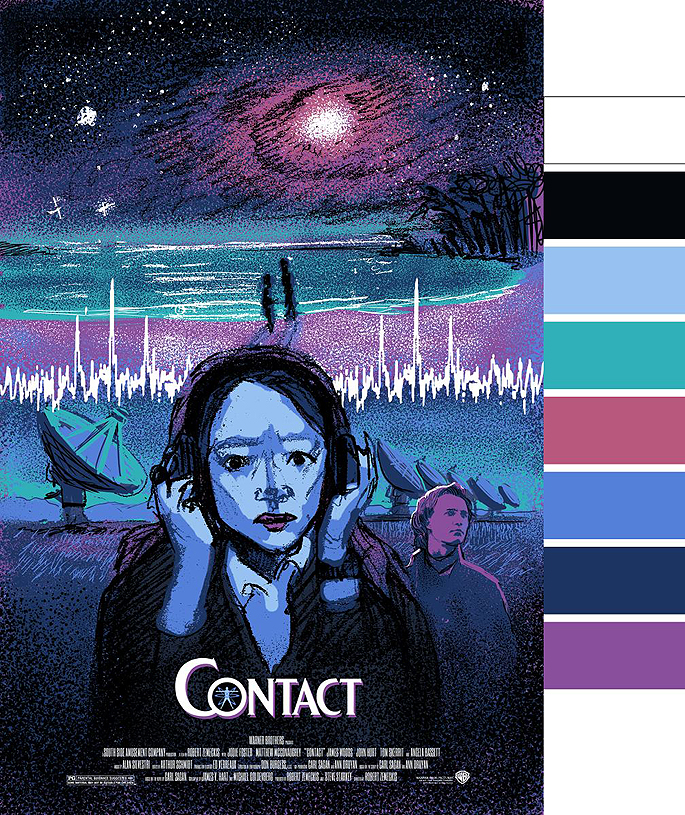 Posted by Courtney Autumn Martin at 11:13 AM 0 comments

PLANTS IN A PATTERN

Here is some freelance work I completed at this time last year. 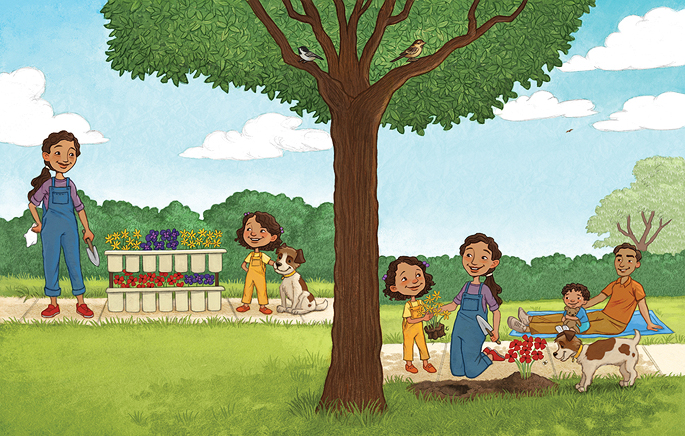 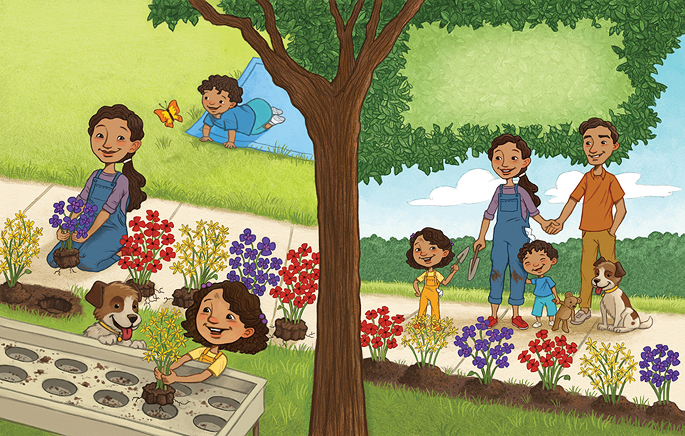 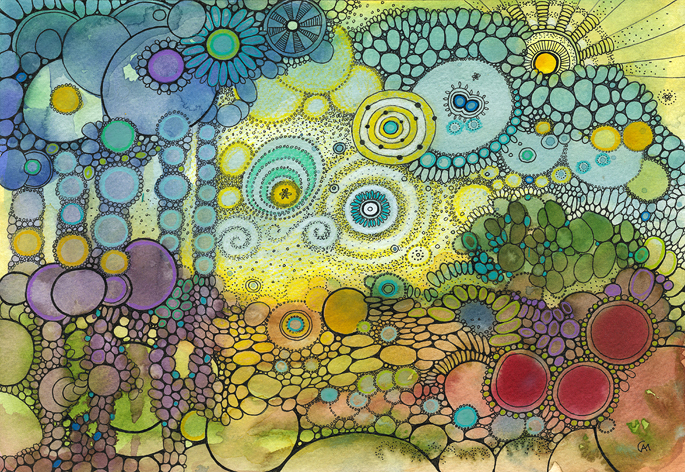 Posted by Courtney Autumn Martin at 11:16 AM 0 comments

THE LION & THE MOUSE (ASSIGNMENT 2)

In January of 2015 (a year ago), I was (again) hired to create images to illustrate the fable of The Lion and the Mouse. This time around, I played with a digital collage technique, focusing on shapes and textures. I wanted to have some fun working in a new way and to make sure I differentiated the images from the when I illustrated the story for a different company just a few months prior. 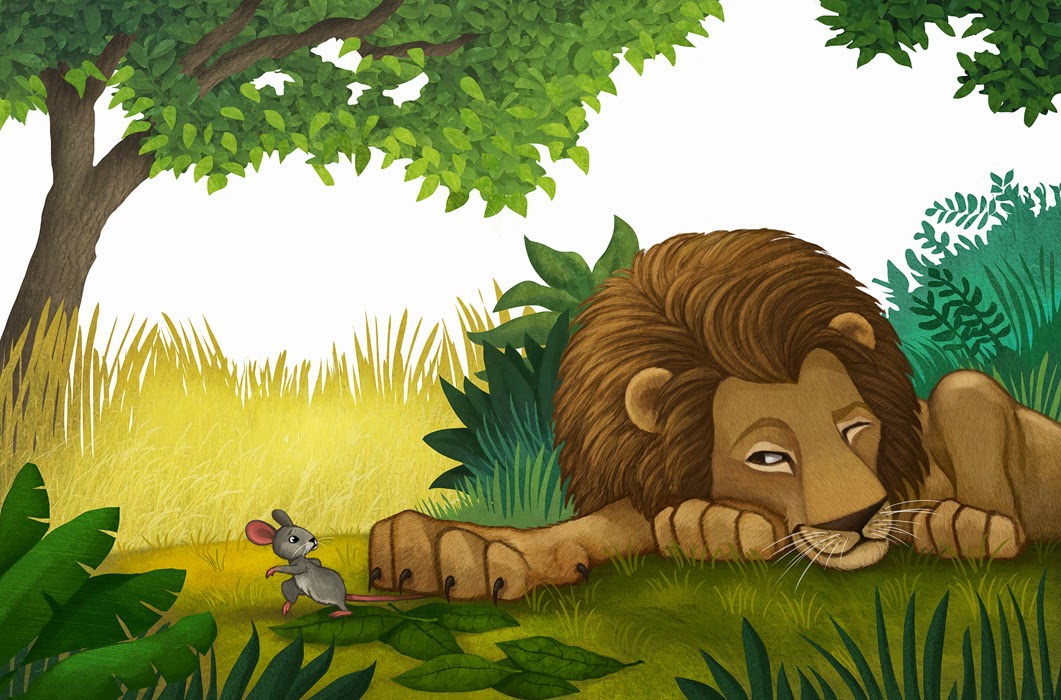 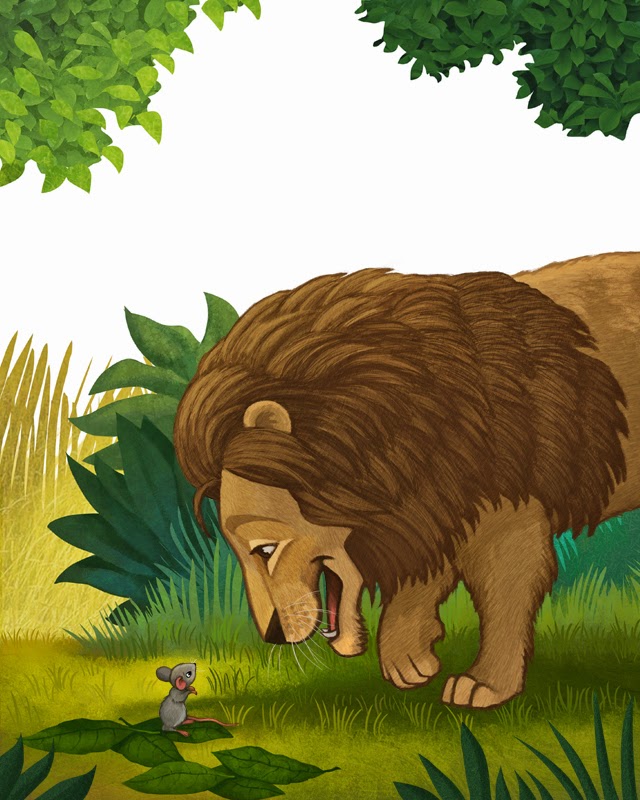 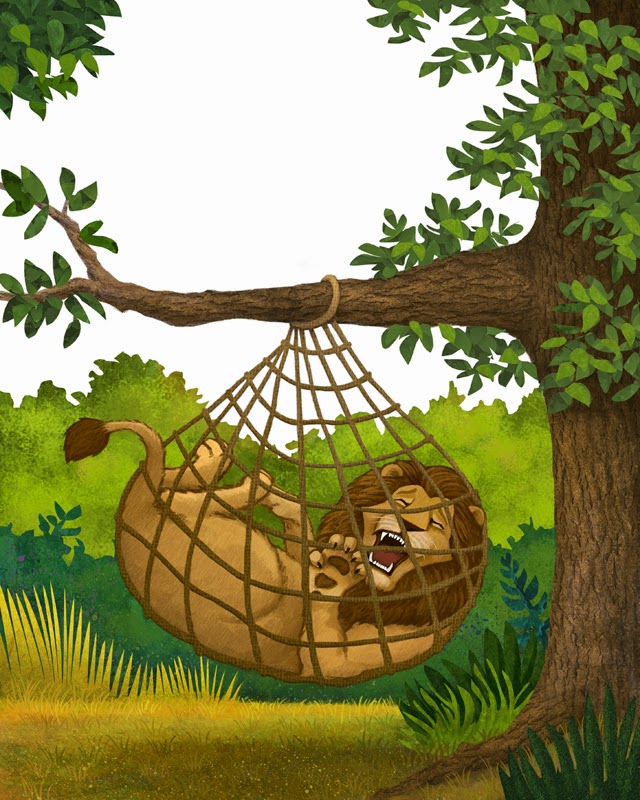 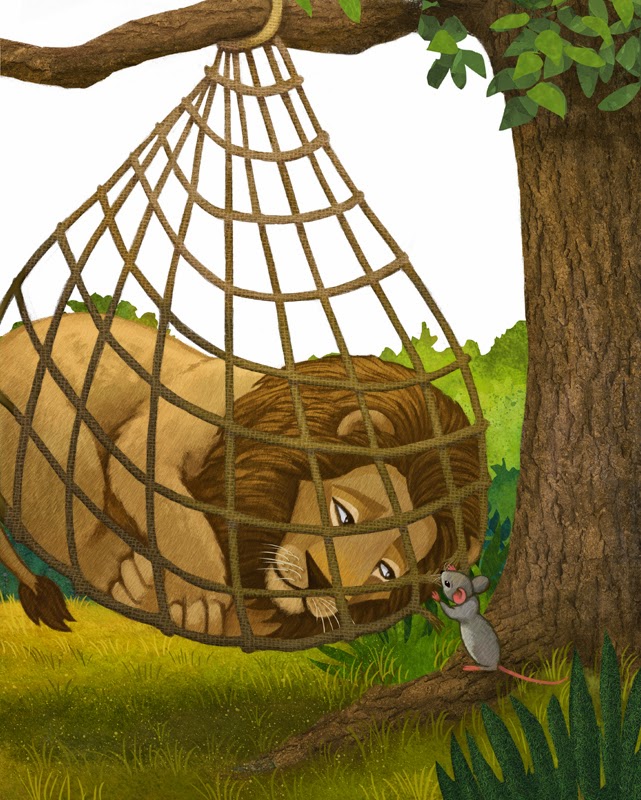 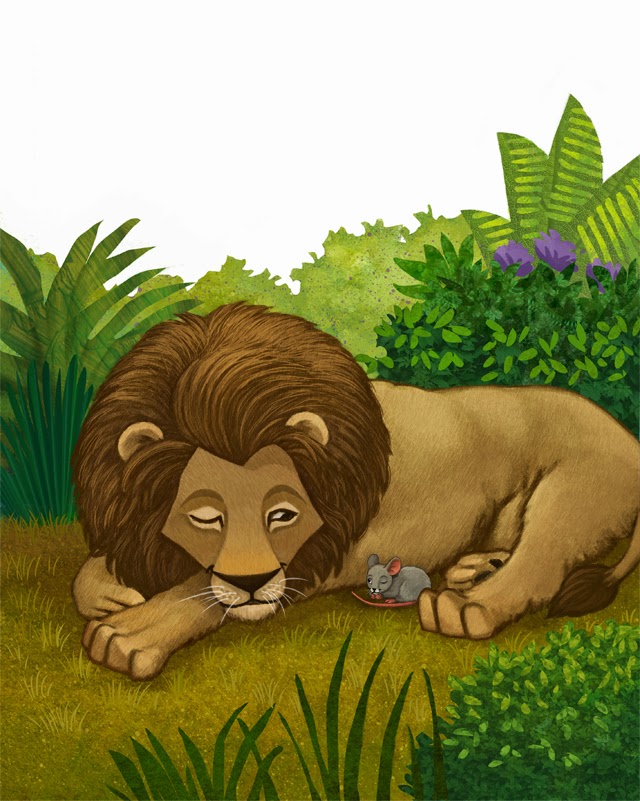 Posted by Courtney Autumn Martin at 9:24 AM 0 comments "The end," said Dumbledore, looking around at them all, "of another year."

2015 was busier than 2014, and that's a good thing. I tried out some new styles, took a couple freelance gigs, created some promotional work, began several cloud paintings (with REAL paint!) and added to my inventory of doodlepaintings.

All in all, it was the most successful year yet selling doodles, and I like the direction I'm heading with my illustrations. I've acquired a large format printer and new Wacom tablet, both of which I imagine being of great assistance in the year(s) to come.

Looking forward to 2016, I hope to dive into poster design (silkscreen style!), chip away at on my line work, develop some independent illustration projects, sketch and journal, and as always, doodle, doodle, doodle. 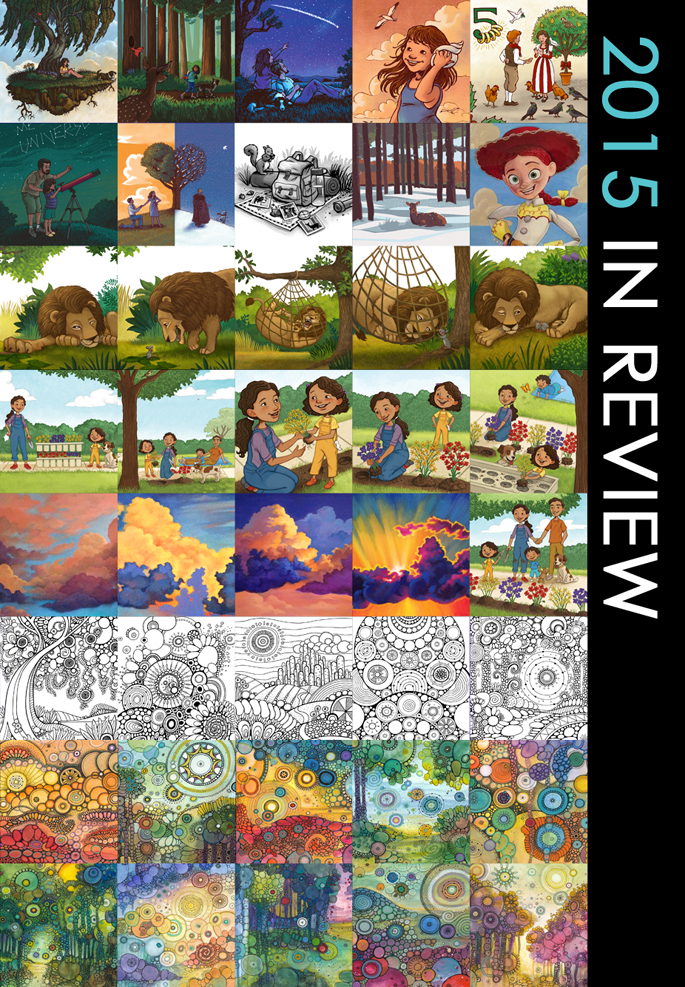